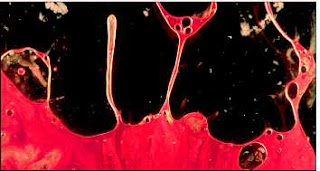 We're starting this ongoing series with some Celebrity Semen love for a deliciously infamous artist, Andres Serrano. Although he's best-known for "Piss Christ," Serrano didn't limit himself to just one bodily fluid in his art; he also produced gorgeous photographic works that portrayed menstrual blood, human milk and, yes, dear reader, our most beloved bodily fluid of all -- semen.

Today, we'll focus on one of Serrano's most famous pieces of semen art, "Blood & Semen II." What do we appreciate about "Blood & Semen II"? We love its bold use of color, shape and line; its sharp division between foreground and background; its slippery, highly textural appearance (thanks to an extreme enlargement of the image through a microscopic lens); its political and emotional undertones (it was produced around the rise of HIV/AIDS, a time when the cultural associations with both blood and semen were drastically shifting); and, of course, its focus on semen.

We'd imagine that we aren't the only ones who'd love Serrano's combination of blood and semen. After all, Lady Gaga is rumored to be producing a fragrance called "Monster" that smells like (You guessed it!) blood and semen. Coincidence? We think not.
Posted by Celebrity Semen Tasting Notes at 10:37 AM